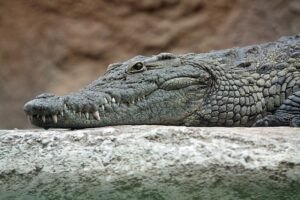 Below is the skull of the crocodile – one of Earth’s oldest living animals. These reptilians are one of nature’s greatest predators and have some of the strongest jaws on the planet. The skull we have has a set of 68 teeth (compared to our 32) and some crocodiles can have up to 80! Crocodiles, like most other reptiles have teeth that aren’t specialised (so there is no dental formula and they are known as homodonts). Rather than having canines/molars/incisors like we do (we are heterodonts), they have an array of very sharp teeth which clamp down on their prey while they thrash it about in the water.

Crocodiles are also polyphodonts which means they replace their teeth several times in their lifetime (with each tooth generally being replaces about 50 times. This reptile could go through around 4000 different teeth in their lifespan).

Additionally, the teeth on their upper jaw are positioned diagonally opposite those on their lower jaw so that when they close their mouths they fit in neatly with one another – this differs to that of alligators. You may notice that there is a slight dent (constriction – figure 17) near the top of their snout, this is here because the 4th tooth on the lower jaw is able to fit in there when the mouth is closed – this explains why you can still see some teeth when their mouths are shut.

From Figure 18, you may notice the narrowness and length of the skull; this is also a good indicator to tell the difference between an alligator and a crocodile – alligators have shorter, fatter, rounder snouts. 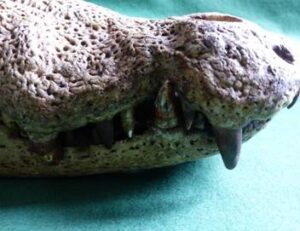 Figure 17 Close Up of a Tooth in Constriction 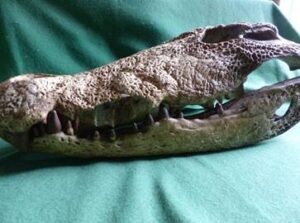 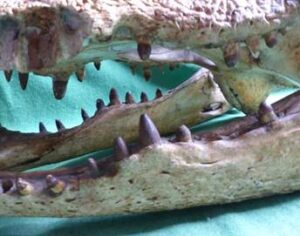