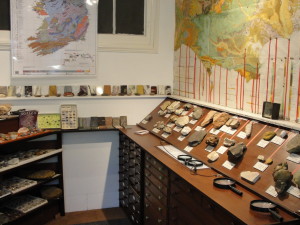 Housed here is one of the largest fully catalogued palaeontological collections in the South of England. It is composed of fossils collected over many decades, not only from various local Mesozoic and Tertiary exposures, but from other more distant older horizons further afield, including many overseas. More importantly many specimens have come from sites no longer accessible. The collections also include several type and figured specimens.

There are informative displays in the Geology Room to interest both beginners, enthusiastic amateurs, and informed specialists. Especially prominent is a fine specimen of the rare chalk ammonite (Parapuzosia leptophyla), 3 ft. in diameter, found at Ringstead Bay by two of our members in 1996, and the splendid set of six natural casts of dinosaur footprints, from the Swanage Purbecks, illustrated below. Part of a unique longer track, these were recently described as Iguanodontipus burrey. 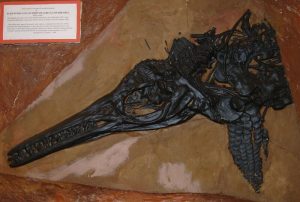 Other interesting exhibits include Jurassic and Cretaceous corals, sea-lilies, echinoids, fishes and great marine reptiles (like the Ichthyosaur shown) from Dorset’s coastal areas and the shires of central England. Another features the remains of Pleistocene mammals from a variety of localities both here and abroad.

Highlights of local (‘Bournemouth area’) geology and palaeontology occupy a special case of their own, and include several seldom collected stumps of anciently submerged trees. Extensive reserve collections include perfect specimens of local fossils now difficult to obtain as many exposures once producing them are today covered by coastal protection works, or which occur in beds that, though still accessible, tend to suffer constant rapid degradation by marine agencies. Local botanical specimens from the celebrated Bournemouth “Leaf Beds” are similarly unobtainable (except fortuitously) as the relevant exposures are now built over.

A separate Mineral Room houses an extensive collection of rocks and minerals from all over the world, amplified, again, by interesting and colourful displays. An outstanding set of highly varied marbles is one of its more striking elements.

A useful library of geological publications, in the form of maps, serials and separate hard and soft cover volumes, is available to complement the collections as a whole.